The secret world of microbes

The secret world of microbes

(From: Soil is the stomach of the plant, read full article)

At the microbiological level, there is something utterly compelling about the digestive process. This microscopic world opens up a new dimension of understanding in relation to the health connections between the life of the soil and the organisms that live inside our bodies. In the human gastrointestinal tract, approximately 1.5kg–2kg of non-human life forms, mostly beneficial bacteria and also other microorganisms, help with the process of digestion, enabling the subsequent absorption of short-chain fatty acids, while living off the energy produced by the fermentation of undigested carbohydrates.

As well as digestion, microbes perform various other vitally important roles in regulating the immune system and preventing colonisation by pathogens. The study of microorganisms, through research such as the Human Microbiome Project, has opened up new doors for understanding health. Similarly, the Earth Microbiome Project is systematically characterising the microbial diversity across the planet.

Even mainstream soil scientists are now beginning to present us with a new and clear message that microorganisms are crucial for soil health – even though we are only just coming to realise how important they are also for our own health. The layer of healthy topsoil, thriving with microorganisms, which covers much of the land’s surface, is in effect a vast digestive system – the collective stomach of all plants, breaking down soil nutrients into bio-available forms that plants can absorb. The rhizosphere, or root ball, is the gut of the plant and the zone where plant roots and soil organisms interact in a whole variety of biotic, symbiotic and pathogenic relationships to enable these organisms to do their work. Plants secrete weak acids to dissolve minerals in the soil then draw these back up in solutions. They also secrete a portion of their photosynthetic energy through their roots as chemical exudates in the form of carbohydrates and proteins, which attract and stimulate the growth of bacteria and fungi.

Without the presence of microorganisms, the mechanics of the digestive system can still function to a certain degree. Purging our intestines of microorganisms through antibiotic use will not stop us from digesting food, just as bypassing the soil ecosystem through using chemical fertilisers or hydroponics will still stimulate plant growth. However, the long-term vitality and health of plants, animals and people is centrally dependent on the presence and diversity of microorganisms, in the soil and gut respectively.

Soil microbial communities are considered the most biodiverse in the world and it is estimated that a single teaspoon of garden soil may contain thousands of species, a billion individuals and one hundred metres of fungal networks. However, only 1% of microbes that live in the rhizosphere have so far been identified by scientists due to difficulties in getting them to grow in the laboratory. “We know more about the stars in the sky than about the soil under our feet,” says US microbiologist Elaine Ingham. Despite the lack of scientific knowledge of the specificities of soil microorganisms, the impacts of destroying soil biodiversity by failing to maintain sufficient organic matter, the overuse of chemicals and heavy tillage are obviously detrimental for soil health and fertility.

Microbiomes as the key to good health

The biodiversity of the organisms in our guts is also crucial for maintaining health. In the human microbiome, this is determined by the specific condition of each section of gastrointestinal tract. However, the compositions of microbial communities are different among people, because the ecological conditions of individual intestines are distinct depending on age, body condition, diet, lifestyle, geography and cultural traditions. Gut microbiomes are unique to each person – a kind of microbial fingerprint. Modern diets with high sugar content and processed foods, along with increased antibiotic use, have been shown to be detrimental to gut microbiota, which, conversely, can be improved through diets that feed the microorganisms that keep our guts healthy.

The realisation that when I eat I am not actually directly feeding myself but a diverse community of microorganisms upon which I depend for my health, has drastically changed my perception of how my interventions as a farmer can have a similar effect on the soils over which I have temporary stewardship. Every action, from crop rotation and feeding soil bacteria and fungi with composts or manures, to aeration and careful timing of grazing and cultivation, has the capacity to enhance or diminish soil life.

This new understanding has been mirrored in the scientific community. Until very recently, the mainstream understanding of food and agriculture has been through the lenses of reductionist chemistry and engineering, while biology has been largely sidelined or ignored. The popularised ‘microbe revolution’ and increased scientific research in microbiology has put the spotlight on linking an understanding of the human biome with the microbial life in soil. However, as with all scientific advances, there are different ways of interpreting and using this knowledge for both the good and ill health of the planet. If we consider the ‘nature as teacher route’ when feeding the soil with compost, we literally feed it with living food that contains a whole range of bacteria and fungi. This starkly contrasts to the biotechnology route in which synthetically bred microbial solutions are being hailed as the manufactured probiotics of the plant world, which aim to increase chemical fertiliser uptake. Similarly, if we eat patented synthetically manufactured probiotics, we bypass the diversity and potency of eating living foods such as fermented foods. For example, it has been shown that one 16-ounce serving of sauerkraut is equal to eight bottles of high potency probiotics!

We need to be really open to all scientific and technological advances, yet remain extremely vigilant of the purposes they serve. There is huge potential for harnessing new knowledge in ways that can help us address the ecological crisis, yet there is also the danger of exploitation by vested interests, which view nature’s capital as a resource to be exploited.

My personal soil challenge is to continue to explore how an understanding of soil, in all its extraordinary dimensions, can inform my future farming practices and deepen my relationship with soil in a way that increases its health. Every farming practice has an impact and every day, as a farmer, I have the possibility of deepening my knowledge, perhaps simply by walking on the earth and learning through my feet. Through doing so I am increasing my intuitive understanding of the consequences of my actions on the soil. 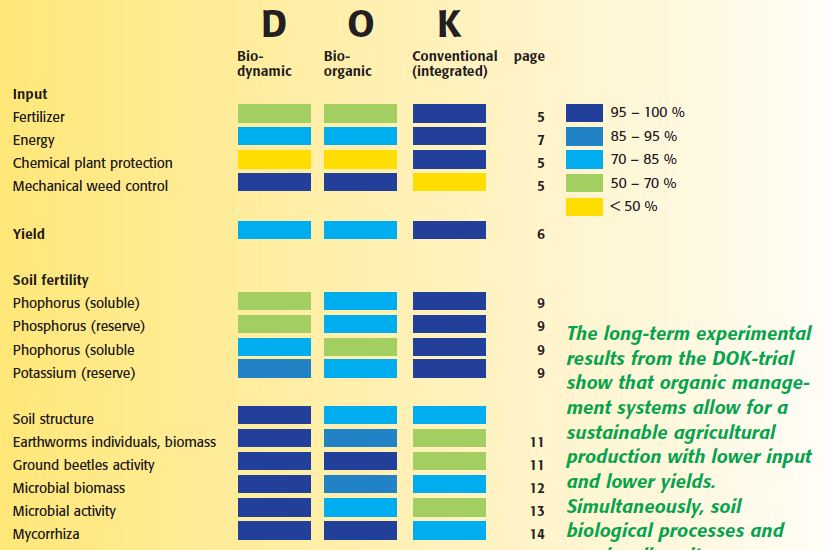 Why soil analysis should be in your plan this autumn